You are here: Home / Articles / Everyone’s a Heretic—So What Do We Do About It? 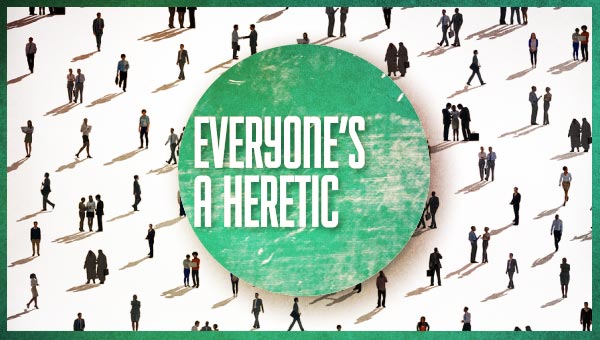 Hi Pastor. I was looking at your posts and a lot of them were very encouraging in terms of staying with the Christian walk. That said, I read that Tim Keller is a heretic. I don’t know much about him, but some say yes, others no. I think one of your posts quoted from him. What do you think? Thank you.

Hey dear friend, thank you so much for your kind words.

Normally I want to be super gracious and thoughtful and nuanced here, but please allow me to get just a tiny bit upset. Not at you, my dear friend, but at this word “heretic.”

The thing is, you’re a heretic. So am I. So is everyone.

We’ve all said dumb things about God. You and me both. None of us have it completely right about Him, and no one owns the monopoly on Christian theology. While I do believe that God is knowable, I also believe that some of our differences in doctrine do not deserve the blanket term “heresy.”

Let’s keep in mind that calling someone a “heretic” or a “blasphemer” a few hundred years ago was a serious accusation that would get someone sent to a funeral pyre. A stake burning. A lynching. It’s a terrible, disgusting word that comes from an embarrassing time in church history. It’s essentially damning someone to hell.

Let’s also ask the question, Who is saying that this person is a heretic? Who makes someone the watchdog and gatekeeper and arbiter of the Christian faith? At what point does one human being with a three-lb. brain say to another human being, “You’re wrong about this divine supernatural being called God”? Is there so much more to know than loving Jesus and loving people? Wouldn’t anything else be negotiable?

That means the 75-year-old man who finds Jesus is a heretic. Nope, sorry, you don’t know enough Bible, old man. The 10-year-old child who loves Jesus is a heretic. Sorry, you don’t know about supralapsarianism and pneumatology, little buddy. Only scholars and saints and ascetic monks could possibly know enough Bible to be qualified for the pearly gates.

This reminds me of when church-people are quick to yell “Pharisee” and “legalist” because we’re so scared of The Other. Our human nature will find any possible way to demonize the other side. See? I just did it, right there. We build camps and tribes and dichotomies so we can say, “At least I’m not like those Christians over there.” We find one little disagreement and then make a division instead of building bridges. We don’t give each other a chance. And maybe faith is more simple than we make it.

My friend: I’ve been to seminary and I can read Greek and Hebrew (seriously) and I’ve read Wayne Grudem’s Systematic Theology, also known as the brick in my backpack that curved my spine. But ultimately, I love Jesus and I love people. I like theology too, really. I love studying the Bible and its history and knowing every tiny detail about Jesus. I’m a nerdy intellectual at heart. But if our theology is making us worse and not better, then maybe we should start over with Jesus first. If our faith does not move us to a greater love, I’m afraid we have not yet met the Jesus we study so diligently.

There are too many basement bloggers that presume “I have it righter than you!”—but even if they did, then what? Smear the other guy’s name? Make fun of his church? Hate on his family? I was once called a lying witch abortionist and a “false teacher,” but I mean: Is this what we’re going to be known for? While we’re dividing over this stuff, the world is laughing at the church and there are 6,000-plus people groups without Jesus, 27 million slaves in the world and 17,000 children who will die today from preventable causes. I’m not going to boycott some pastor with slightly different theology than mine. I’m going to serve the homeless and donate to fight human trafficking. I’m also going to love those people who overuse “heretic.”

I’m all for sound doctrine and right biblical teaching. There’s certainly heresy in the Christian world. But this ought to move us toward conversation and prayer. It ought to move us toward the person and not away, with grace and a listening ear. If it’s true that someone might be a heretic, then the first thing we’re called to do is love them, and then speak the truth in love. If I can’t love first, then even I wouldn’t listen to me. The greatest heresy is to not love. Christians have the greatest love in the universe, who compels us to reach across the divide, as he did. If we love like Jesus does, then maybe we’ll make it.